The last 6 months or so have been insane with everything going on; sports seasons were cancelled and of course, school was changed to online rather than attending at our school everyday. But, this still did not stop the teachers from organizing fun and engaging projects for us to work on. One of them being the one I will be discussing today.

This project’s goal was for us to learn about World War I in the perspective of individual Canadians and to show how it impacted us as a country. As you may or not know, Canada served as a strong ali to Britain during the great war which helped them gain a sense of independence from its colonial past.

In our final product from this project, we were to all individually research a Canadian soldier from WWI as well as a certain topic from the war while incorporating our own research and findings to the answer to our Driving Question: How was Canada’s Identity impacted by the events of WWI? As well as us reading a book and participating in weekly novel studies to help show a deeper understanding to WWI and the characters and text in the book.

Comprehend: What literacy skills am I using to read, listen, and view texts for understanding?

In this project, we participated in weekly novel studies. With the book, I would sometimes go back to what I had just read to reach a better understanding of the perspective of the protagonist and what world war I really was like back then. Another skill that I had used while reading the book for our novel study was being able to summarize what had happened in all those chapters when it came to this book. This came useful to me during our book chats because it made it much easier for me to discuss with my group. My assignment from our first Novel Study

In this project, I used a lot of note taking since I had so much information to put in just 3 pages, especially when it came to my topic (The Battle of Somme) since there were many websites, videos and e-books about it. To do so, I highlighted the most important parts of the battle, the people included in it and the overall consequences after this battle.

Take Historical Perspective: How can we overcome our current concerns, beliefs, and values to understand those of people in the past?

Reading this book also helped me reach a better understanding of how miserable everyone was during the war and the emotions and trauma they had experienced. And, in especially the protagonists point of view, which is what many others had to experience as well was having to lose so many loved ones in such a pretty small amount of time.

Growing on this topic, learning about how important The Battle of Somme was: known as one of the biggest and bloodiest battles in all of human history. It was huge being able to realize how horrible World War I really was.

To conclude on my book pages, being able to try out a little bit of a different writing style was interesting for me and it actually turned out pretty good. I also enjoyed the formatting I ended up with on my book pages, not taking up too much space but not having too much free space either. The only thing that I would certainly change though is that I would’ve added more information on the Canadians perspective and role in The Battle of Somme. This project was great to learn about world war I since I had always been interested in learning more about it. I also feel like we got to learn so well about it because we explored a fictional point of view, being our novel study and being able to research a soldier that had actually participated in the war not to mention researching our own topic in the war. 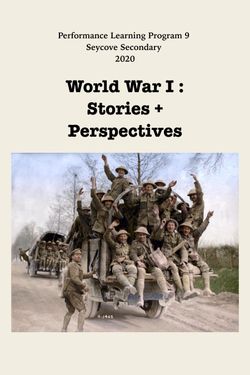