The 7 Habits VS a “Pro”crastinator Have you ever tried to “speed-run” a blog post? Yeah, me neither, but I guess there’s always time for a first. This week has been hectic (I got sick and practically stared at my ceiling for 3 days. Let’s just say it messed up EVERYTHING).

I’ve never liked self help books. When I saw them in Indigo, I would run away.  The first time I read one was in Grade 7. We were assigned to read it and complete workbooks throughout the year. When I try to recall it, I still cringe at the horrific advice it gave me.

Ok, ok. Maybe “horrific” is a bit of an exaggeration… But that’s beside the point.

Have you ever heard of the 7 Habits? When I started this project, I surely didn’t. I had no idea what to expect when I downloaded the book, but I knew I was in for a ride.

“The 7 Habits of Highly Effective People” is a business and self-help book written by Stephen Covey. His writings have sparked several other versions of his work, including the teen and infographic versions.

For this project, I decided to go along with the teen version (which was written by his son.) Although some things seemed a little outdated or not applicable to me (for the last time, I’m not dating!), it wasn’t unbearable.

Anyways, according to these books, there are 7 habits you need to follow in order to be successful.

Habit 2: Begin with the End in Mind (thinking about end goals)

Habit 5: Seek First to Understand, Then To Be Understood (listening to others with open ears)

Habit 7: Sharpen the Saw (recharge yourself)

If you want to learn more, you could read my notes on each habit: Did I enjoy this book? As someone who prefers using reading as a form of escapism, I definitely wouldn’t pick it off the shelf. However, when I gave it a chance, I can admit it has some good qualities. Overall, it wasn’t my cup of tea… It sounded too much like my mom for my liking…

(Big shoutout to her, she’s probably the only one who reads my posts…)

Ok, ok, I’ll admit. I’m just really guilty of breaking all these habits and I didn’t like being called out for it. It was a good book, and I’d recommend it if you need a bit of advice.

Anyways, to show our understanding, we completed many activities. From workbooks to cards, there was an abundance of choice. For each section of the book we completed, we would choose an activity from this “choice board” and complete it. For reference, here’s a graphic describing the sections in the book: The first section was the set-up, which was practically just an introduction to the themes of the book. At first, I had no idea what to do. I went along with animation, because I wanted to draw happy mushrooms. Looking back, I could have improved it in terms of personalization. It felt like a repeat of the textbook and not something that reflected myself.

Here’s an explanation for the video:

The next section was the “private victory” which was made up of the first three habits: Be proactive, begin with the end in mind, and put first things first.) This focused on the “mental battle”… the thing I struggle with the most. With this activity, I had a better understanding of the task at hand, and I decided to create something more unique. After skimming through one of my mom’s books, I decided to write a short fairytale about a protagonist that struggles with procrastination (aka me but obviously cooler). Overall, I’m most proud of this activity. 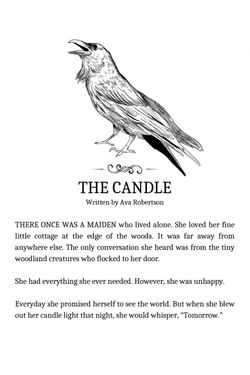 The Candle
Click to read this book, made with Book Creator
https://read.bookcreator.com

And here’s an explanation:

After succeeding with the mind, the next step is taking action. The Public Victory was all about taking that step forward and cooperating with others. This included habits 4, 5, and 5. For this choice board, I used my hands (strange, I know right?!) to build a house of cards, and wrote a short metaphor about it. This one took longer than expected, but I was able to learn a lot from it.

Here’s my houses of cards: Finally, we were on to the best part of the book; Renewal. This included the final habit, sharpen the saw. I knew straight away what I wanted to do. Since art is my forte, my muse, and my salvation, I had no choice in the matter. My hand simply started doodling! In that end, I attempted to draw a house, which isn’t what I typically draw since I hate perspective WITH A PASSION. However, I’m very happy with the end result. And here’s an explanation:

With those out of the way, I suppose I have to mention another activity we completed outside of the choice board. We had to create a “mission statement table” which included pictures of our “role models” and a personal motto. I included many animators/artists and a couple of fictional characters. BUT, for my motto, I knew I had to go with my favourite line from “Meet the Robinsons”… Finally, we were at the end of the book… and onwards to create our “final products.” These final products are activities in the choice board. However, we get to choose which habits they will reflect. Also, we had to have one of each category: kinesthetic, visual and audio (including this blog post as writing.)  They also had to connect with the learning profiles, which ended up being tricky for me. BUT FIRSt, we had to pitch our ideas (which is something I’m terrible at). Luckily, I managed to do it, and here’s my pitch: With that out of the way, we were left to create our strange ideas. Although, in the end, I strayed a bit from my original ideas, but I think they’re alright.

Personal and Social: How do I use the 7 Habits to develop personal and social awareness and responsibility and positive personal and cultural identity to support my growth as a learner? In this collage, I chose to represent habits 5 and 7. I took this as an opportunity to understand my roots and the aspects that make up my worldview. I’ve always felt like my identity was strange. I pressured myself to embrace certain parts more than others. Silly as it sounds, I’ve felt like an outcast in my own culture. In reality, this activity made me realize how little I know about the world and how much growth I have left as a learner.

Thinking: How do I use the 7 Habits to think creatively, critically and reflectively to support my growth as a learner?

For this audio product, I included habits 1 and 2. I used this as an opportunity to try a new skill. This activity helped me recognize areas in which I want to improve and grow. I’ve always loved this song, and it was so much fun trying to learn how to play it myself. Despite not knowing any notes on the piano, I managed to watch other people play it and copied their movements (probably not the best way to learn, but that’s alright lol). Although, Beethoven’s ghost is mad at my horrible playing, I think I’ve improved from Ode to Joy! I’ve always liked bashing my fingers on the keys of my mom’s old keyboard, but it was about time I actually tried.

Communication: How do I use the 7 Habits to communicate and collaborate and develop habits to support my growth as a learner? Originally, I wanted to create a quilt. However, I soon realized that I didn’t have the time to create a blanket (nor the fabric.) So I decided to make a small, little bag. It still represents the same habits (3, 4, 6) and uses my fabric scraps. I wanted this product to present how different parts can come together and use their differences to create something new. However, to connect this to the profile, I decided to show it in a new light. I hid one of my childhood dolls inside the bag.  In order to grow as a collaborative learner, I must take a step forward and learn to leave my comfort zone (aka the bag). I need to stop hiding and grow to be brave.

In the end, this was one hectic blog post. I believe I have learned to connect further to the driving questions. All these activities have allowed me to take control of my own learning, and be creative with it. I’ve made and tried so many different things! I’m proud that I’ve been able to allow my creative side to flourish! I think I’ve grown a lot!

In the future, I hope to improve in the 1st Habit: Be Proactive. As seen in the title, I procrastinate a lot. I often catch myself putting things off for later, and then I scramble to get them done. This book has helped me to become more aware of this problem. Now, I know what I need to do in order to improve!

…And finally, I bid thee adieu and farewell, my dear readers! Keep your eyes peeled for my next blog post… it’s about time I return to comics!