Hey guys, the last few months have been hectic, especially in school, but somehow our PLP teachers managed to still take the time to create fully fleshed out projects for us to complete. And our latest humanities project, “The Great War”, is no exception. As you can probably tell from the name this project surrounded WWI but instead of just looking at the different battles and the dates we went a little bit deeper. The driving question for this project was:

How can exploring text and stories help us understand the impact of WWI on Canada’s identity?

Which in itself gets us to focus more on the underlying aspects of the war but our competencies for this project take it even further. First, we have Historical Perspective which talks about the ability to put aside your current beliefs and concerns so you can better understand the perspective of people in WWI. The other competency is Comprehend and focuses on what literary skills we used to read, listen, and view the different text in this project in order to understand them. I’ll be explaining how I used these competencies in this project within the rest of the post, enjoy! There was a saying that my teacher kept telling us throughout this project: They went up as Albertans they came down as Canadians, They went up as Québécois they came down as Canadians, they went up as islanders they came down as Canadians. You may think you understand the meaning behind it, the importance of it, but truly you could only understand on a surface level; the bare minimum. This was also true for myself, I thought I knew what the saying was talking about but there was one thing I lacked, Historical Perspective. And that was exactly what Generals Die in Bed gave me. For those of you who don’t know, Generals Die in Bed is a book that follows a Canadian Soldier through his time in WWI and spares no detail when it comes to the more gruesome parts of the war. But the part of the book that is truly significant is the way it treats identity or lack thereof. Throughout the book you see how the men change the longer they stay in the fight. The battlefield didn’t care who you were, why you were there, or your life back home; only what side of the fight you were on, and that can change your perspective surrounding identity as a whole. As I said before, Generals Die in Bed gave me the Historical Perspective that I had been missing but it may have shown a darker side to the saying above. Even though the war may have brought men from all different backgrounds together under one cause and one flag, they ended up losing their personal identity in the process. On and off the battlefield all they were were the Canadians, always ready for a fight or to throw their money away on cheap booze and such, nothing more. But to tie it in with the competencies, as you can probably already tell this book really helped me use the Historical Perspective competency. The way I ended up using that competency is exactly what I was just talking about, I let go of my preconceived ideas of how the war affected Canadians identities and read Generals Die in Bed with a blank mind, making notes of how the characters changed throughout the book, even in just the way he was writing. With that information, I was able to create an analysis of the effects of the war on his identity without any bias affecting it. 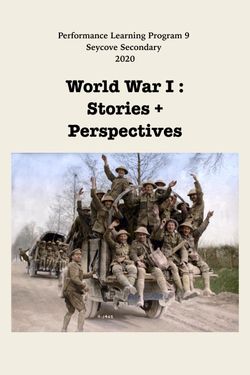 However, that wasn’t the only thing we did in this project, in fact, that was just a side part of it. The main product that we would create for this project would be, funnily enough, a WWI book. However, unlike Generals Die in Bed, this book would focus on significant events, views, etc. Our job was to research a topic that we had chosen and create 4-6 book pages on it in an app called book creator, I chose The Schlieffen Plan.

The Schlieffen Plan
If you don’t know what The Schlieffen Plan is I’ll give a short rundown, The Schlieffen Plan was first created in 1905 as a preventative plan to stop a war between Russia and France at the same time but was never put into action until 1914. By then the plan was even more out of date than it was before and ended up failing to leave a long line of trenches along northern France that was a gruesome battlefield for many German and French men.

When creating our book we had to follow a pretty straightforward template for our pages just so they all matched and made sense together. This template just covered fonts, font sizes, and basic arrangements of the first page so the reader knows what the topic is about. However, that left the rest of the design of the pages to us, including how we used media. What was even better, was that since we were making this as a digital book we could add things that you usually couldn’t with regular books, like voice notes or videos. I really wanted to use this to my advantage and help people understand the subject a lot better by using these different forms of media. Looking back, I think what I ended up doing is using my knowledge of the Comprehend Competency and different ways people take in information to make this section of the book as informative as possible. To elaborate, one way I did this was to add the videos visualizing the movements of the army with descriptions of what is happening underneath. The reason for this is because the mind can only visualize so much so having the video accompanying the description allows the reader to fully understand the information being presented to them.

In addition to our topic we also had to research a Canadian soldier who served in WWI and tell their story. After a bit of searching, I had found a soldier that seemed to have enough information on him to be an interesting story, that was when my mother informed me that my Great-Grandfather, William Holt Wilson, had actually served in WWI. Although I was a little skeptical at first I ended up deciding to write about him instead, mainly because there was a crazy amount of information and documents on the internet about him and his battalion, my own Papa could recall stories about him as well as having the actual letters he wrote to his family, and it’s just really cool to write about your own family. Because I had so much information about the battle he was in and the injuries he sustained I ended up mostly write about that and the time leading up to it. However, I hope that in my writing I was able to convey how unlucky many of the men in WWI were and how horrible it was to be a soldier. 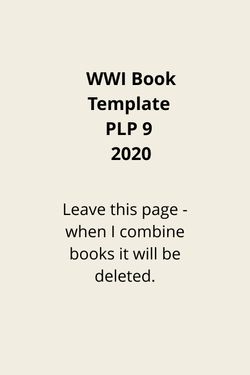 The Schlieffen Plan
Click to read this book, made with Book Creator
https://read.bookcreator.com

However, I think it’s time to wrap this blog post up so it’s finally time for me to answer the driving question: How can exploring text and stories help us understand the impact of WWI on Canada’s identity? Although I haven’t really talked about Canada’s identity as a whole in this blog post I think I still have an answer, whether or not it’s the right answer is up to you but it’s an answer nevertheless. As you may know, WWI was really the time that Canada solidified itself as an independent nation in regards to Great Britain, most notably when we insisted on signing the treaty of Versailles as an independent nation. However, as I have learned from my work on Generals Die in Bed and the Soldier Story the place where we really see the impact on Canada’s identity is within the storylines told and created by the Canadian’s themselves. A countries identity changes as the people change and by reading these texts and stories we are able to see the change in the people that changed the country as a whole. Hopefully, you have enjoyed my learning journey and have maybe learned something yourself, feel free to read the class book for yourself, there are some great stories in there. However, with that, I fair you adieu.