Hello! This blog post will be about a new Maker 9 project called ‘Believe in Good’. Within this project we were tasked with reading a book called The 7 habits By Stephen Covey or a connecting book targeted towards teens called 7 Habits of a Highly Effective Teen by Sean Covey. I read the teen version by Sean Covey, which really made myself realize a lot of my actions. If you can recall the term the ‘7 habits’ I was actually working through this project at my time in Loon Lake. To give a brief summary of the 7 habits, it’s basically seven well… habits that focus on the improvement of one’s actions both of themselves and others. There are four key parts of this book, Set-Up, Private Victory, Public Victory, and Renewal in which I continued to reflect on as I was reading. The main concepts that I worked through were creating assessment choice board activities and workbooks that showed my understanding of each specific habit within the reading.

To become a better learner this project, as well as the many other projects I’ve done, included a driving question and curricular competency. I specifically strove to construct my knowledge using technology to become an Empowered Learner and use tech only to become a Creative Communicator. The driving question that relates to these competencies for this project is “How can I be my most effective self?”. Throughout this blog post I will be representing the evidence that support my learning of the competencies and answer to the driving question. In addition, to specifically see my understanding of the connection between these competencies and the 7 habits keep reading and see my newly created finalized assessment choice board activities.

To start off this project I began reading the book and understanding each section. To start off I completed the first workbook for “Step Up” which gave me an overview of 7 habits as a whole. I was also able to specifically learn about the concept of paradigms and principles, which as I reflect was a great way to start knowing the mood/theme of this project. I was also allowed time to work on this section at my time at Loon Lake, so I did include a specific reflection about my PBA and progress at that point. In addition to the reading and workbook I completed my first assessment choice board activity, which was a creative way to express my knowledge of this section of the book. We were able to choose through different forms of media, such as Kinaesthetic, Written, Audio and Visual. For this section I chose to create a playlist, which falls under the audio category, and I based it off of the factors I learnt in this section. An additional explanation was included within all four choice board activities for the sections in the book. Overall, I think the “Set-Up” was a great way to understand the upcoming factors in this project. I also think I was able to start working on the curricular competency, Creative Communicator because I was able to communicate my knowledge throughout a creative media. 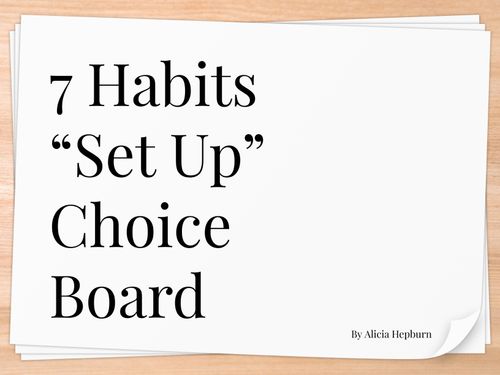 7 habits activites
Click to read this book, made with Book Creator
https://read.bookcreator.com

Once I completed the “Set-Up” section I moved onto the next section, containing the first three habits, called “The Private Victory”. The habits that I read about in this section were Be Proactive, Begin With The End In Mind, and Put First Things First. I learnt a lot throughout this section because I think I was able to immediately reflect upon how I function and what ways I could improve myself to become an effective person. The workbook I completed was a great start and was beneficial for me to show my comprehension of these first three habits in written form. I then created another assessment choice board activity and decided to the meaning of each habit throughout a graphical collage. I tried to make representations of what each habit could represent and drew them. In addition, to both the workbook and choice board I completed a separate activity called ‘Mission Statement Table’ which was centred around the second habit. This was about creating a table full of people that would help guide myself through a path to achieve my end goal. I think that all of these activities made myself communicate and construct my knowledge using different techniques associated with technology. 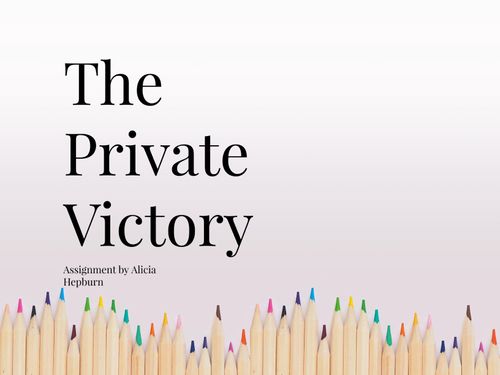 7 habits activites
Click to read this book, made with Book Creator
https://read.bookcreator.com

The last two sections of the book that I worked on were called “The Public Victory” and “Renewal”. The Public Victory focused on how to improve yourself with connecting to others within the three habits Think Win-Win, Seek First to Understand Then To Be Understood, and Synergize. I personally learnt a lot from this section because I think I constantly use here skills in communicating with others. To show this in an assessment choice board I created an animation. Throughout the renewal section it focused on the last habit, Sharpen the Saw, and four key factors with renewing (Emotional/Social, Body, Spirit, and Mind). I truly understanding how important these factors are and I’m continuing to use them to improve myself as a person and a learner. Since I understood these sections very well I was able to craft them into both a poem and animation for my assessment choice board activity. I really think I showed that I could construct my knowledge of each of these sections with creative insight throughout the technological media I created. The kinaesthetic puzzle that I created represents the habits one and two, Be Proactive and Sharpen the Saw. This connects to the core competency “Personal and Social” because it each habit is the key to developing social awareness and responsibility. Specifically, habit 1 Be Proactive is about knowing the choices that one makes to become a unique individual, which connects to the meaning of ‘Positive Personal and Cultural Identity’. I also shows the connect of how Habit 7 is about balancing strengthen areas, which is another concept found in ‘Personal awareness and responsibility’.

The audio Podcast I created, with a peer (Brooke!), shows the three habits four (Think Win-Win) five (Seek First to Understand, Then to Be Understood), and six (Synergize). These habits and the overall creation relates to the core competency “Communication”. Specifically, habits four and 6 really focus on the curricular competency collaborating because to Think Win-Win people tend to get opinions on others instead of building off of other’s thoughts to create collaborative results. Also, the Habit Synergize focus on celebrating differences, which really connects to how people can collaborate to share a common goal. The fourth habit, Seek First to Understand, Then to Be Understood, really focuses on the curricular competency of communicating. This is because the habit shares the same concept of communicating confidently and showing attention to an audience. I was able to interwind all of this into this podcast. The visual item I created was a graphic organizer that showed habit two (Begin With The End in Mind) and three (Put First Things First). The core competency that both these habits connect to are ‘Thinking’. Throughout this graphic organizer I showed an example of the habit Put First Things First, which directly relates to the curricular competency ‘Creative Thinking’. This is because they both revolve around the idea of evaluating ideas (which ones are more important, valuable etc.). The habit, Begin With The End In Mind is displayed in the graphic organizer as well as it’s connect competency ‘Critical and Reflective Thinking’. They both connect because to create an end goal you have to evaluate evidence and make judgements, which is the main concept of that competency. In conclusion, I really learnt a lot about the 7 habits and enjoyed reading the book on my spare time, it was quite good. By reflect upon this project I think I was able to become an Empowered Learner by using technology in creative ways to construct my knowledge of each habit. I think I was also able to become a Creative Communicator by using technology to create and communicate my understanding of the specific habit I was learning. After completing my final choice boards and obtaining a large amount of knowledge I’m able to answer the driving question for this project “How Can I Be My Most Effective Self?”. To become my most effective self I must develop an in-dept knowledge of the 7 habits. I can then implement every aspect of the 7 habits into everything do. This personal boost can have a huge impact on my school life, particularly understanding the curricular competency because the 7 habits are directly connected to the competencies. I also want to specifically improve on the habit Seek First To Understand, Then To Be Understood. I truly think that if I listen with intent I will be able to understand intellectually and emotional thoughts causing me to become the most effective person towards other’s and myself.

What habit do you need to improve on the most? Thank you for reading!

Special thanks to Brooke for being featured in the podcast!