Now that winter break is right around the corner, our final project has been coming to an end. What we’ve been working on for the last few has been a project called Rise of the Frankenstuffies. It’s another step into our learnings of Crane Brintons theory and revolutions, specifically the industrial revolution. So what did we have to do for this project? Well first we had to take apart some different stuffies and sew different parts onto each like Frankenstein . Hence the name “frankenstuffie”. The driving question for this project was “How do revolutions transform the world?” Which I will reflect on in the milestones but directly answer at the end. Once again I will be going through the milestones, intertwining what we learned and the competencies into them. Then reflecting at the end.

Our first task was to create our frankenstuffie. I used a green dragon, a pink flamingo, an orange charmander and a pink pig. A sewed all these stuffies together and created Gregory Johnson III. An alien from the planet Betelgeuse. There’s a photo of him attached below. After we had our stuffie, we had to create a character file for milestone one. This included, the stuffies background, name and general character and what they do, say, feel and think. This really helped us understand what our frankenstuffie really was so we could structure our further thinking for the next milestones showing our creative communicator. The final part of milestone one was creating a very short  video using different angles and shots. We used what we learned from video and our notes to complete this.

Milestone two was creating the story for our character. We used our notes to create a beginning, middle and end that showed the 6+1 traits so our story would have purpose and tell and actual story. All this showing that we could design texts and then comprehend them. Using these to create a good final product. My story was about Gregory global warming, society and breaking free. I’ll link it below so go give it a read if you want. 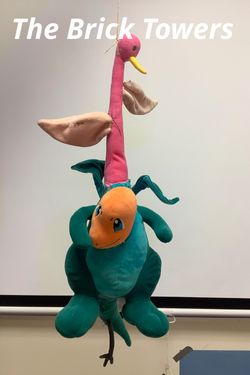 The Brick Towers
Click to read this book, made with Book Creator
https://read.bookcreator.com

Milestone three was cancelled so not much here about that, but we did create mini videos using many different tools to get us familiar with what we would be using for the final video. My best mini video is below.

Milestone four was leading up to our final video. We had to show cause and consequence, historical significance and once again designing texts. Our task was to plan and create a story. This consisted of a screenplay which would be used to plan our video and a numbers document planner about each stage we had to go through to get to the final product. We had to use a very specific font and formatting system to replicate a real screenplay for the big budget foundI mainly showed cause and consequence and historical significance through the screenplay as it was in the story itself. The designing texts was in the screenplay’s creation and the planner. Next, we had to create a storyboard for milestone five. This would be a visual representation of what our final video would look like. We had to design texts, comprehend them, then creatively communicate. The story boards made it significant easier as we already knew what to do, we just had to do it. Designing and comprehending texts was making the storyboards using sketches, time stamps and audio, while creatively communicating was shown through us using our iPads and technology to create the storyboard itself. Lastly, milestone six, the final film. This would be the total accumulation of all our work up until this point. The character creation, story, screenplay, planning, and storyboard. Along with all the competencies. I created a film using designing texts and creative communicator which were shown in everything I used to create the final film and the film itself. So how do revolutions transform societies? Well in my own words, they transform societies through change, global connection, learning and the differences throughout the world.

Overall this project was a great ending to get into the winter break and Christmas time. Creating the frankenstuffies was super fun and I hope that in the future, we can do more hands on projects like this.