Welcome back to my blog, today Im going to be talking about the Humanities project we just finished. I found this project really interesting and I feel I learned so much. This project was about World War 1 and was mostly and individual project. The final product was a graphic novel/comic that we got to chose the WW1 topic for. The driving question for this project was “How might we use graphic novels to understand Canada’s involvement in WWI?”. So to answer that I created a graphic novel which focuses on Canadian Women as nurses during the war in an interesting perspective. During this project I feel that I put a lot of work researching and learning all about the war. I am happy with the outcome and with everything I accomplished throughout the last few weeks. Check out my final comic down below! 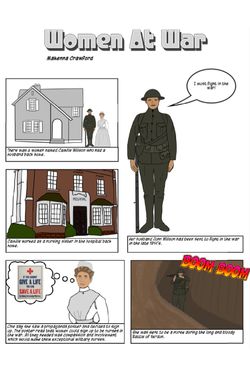 Women At War
Click to read this book, made with Book Creator
https://read.bookcreator.com

As this project focused on WW1 this meant we gained a lot of information along the way. This started with the part of the reading and research we did using the Nelson Text. This text helped us understand the underlying causes and consequences of the war. During this time we also filled out a worksheet where we stated the consequences and rated them between 1 and 5 on how important we thought they were. I decided that I thought alliances were the main cause of WW1. This worksheet helped me complete the next task which was a paragraph explaining what we thought the main cause was and why. Here’s how my WW1 causes paragraph turned out.

The next big thing we did was read The War To End All Wars, World War One graphic novel. I found reading this novel really interesting and it was a good source of information as well. I definitely learned lots by reading this novel and I enjoyed all the images and visuals that were included. After finishing the novel we completed a Graphic Novel Reflection. I personally think I could have wrote and talked a bit more on my opinion of the novel. Other then that I believe I accomplished this task.

Then came the time to pick our comic topics and start planing. I ended up going with the topic women at war specifically women and there roles as nurses on the battle field. I filled out planning documents including information answering the 5W’s (who, what, where, when, and why). This took quite a bit of research but completing that helped me make the next steps of creating the story spine for my comic. This step took some time but ended up pretty good. After this I made a rough story template with sketches which followed my story spine. At this point there was still lots of work that needed to be done. So I moved onto my first draft of my comic which once again followed my story spine but also included some of the drawings my final comic would include. We then got to do a peer conference to get feedback, tips, and ideas from others. I found this really helped me when creating the final comic. Which brings me to the last step. My final comic included a story with the beginning, middle, and end. It has factual evidence including dates and a specific battle, 10 panels, and lastly my graphics/drawings went well with the story and included colour. I think I showed an authentic understanding of the task and had a solid story. If I were to change anything I would go back to my story and make it longer to make the story flow better. Other then that I think the final product turned out good.

Overall I believe I successfully accomplished this project. I got most if not all my work handed in on time. I feel I accomplished all the assignments that all helped me create my final comic. Throughout the time that we did this project I worked hard to make sure I understood all the World War 1 information we learned along with do the needed research. I also feel my final comic turned out great and all the work I put into making the images, and making sure my research was correct payed off.

I hope you enjoyed reading about this Humanities project and I will be back with more posts soon.